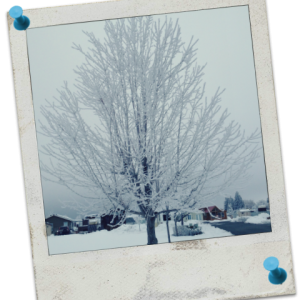 One of the major winter weather phenomenons that we experience in the Lake Chelan Valley is the combined effects of sub freezing temperatures accompanied with high relative humidity levels. The effect is the formation of ice and in more extreme cases, freezing fog that coats all trees, structures and critical heating equipment.

Additionally, as snow slides off the roof, it can pile up against buildings, on top of heating equipment and can damage unprotected objects below. We can also see significant accumulations of snow from successive storms. As the relative humidity increases and temperatures warm, earlier layers of drier snow will absorb this moisture and increase in weight and density putting more stresses upon roof structures. 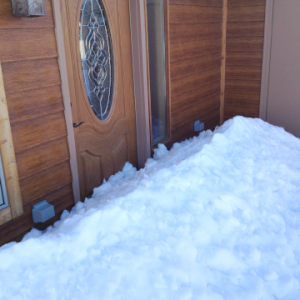 It is important to remove snow from the exterior walls and doorways. There are several reasons for doing this. The first is to prevent water intrusion into the home through cracks, openings, crawl vents, under doors, etc. The second reason is to prevent deterioration of the siding and paint from the constant presence of moisture. Siding and paint coatings need to breathe and go through cycles of wetting and drying to insure longevity of these materials. With the constant presence of either snow or water splash, these materials start to deteriorate. The picture below is an example of this happening on a local home. As you can see, this siding is not holding up well and I suspect that the entire bottom board will need to be replaced. Hopefully, no rot has migrated into the interior wall cavities. There are also a number of other contributing factors on this home that should be addressed to prevent

In doing additional research, I discovered that other homeowners in snow regions throughout the U.S. are also experiencing similar problems with their cement board sidings. In fact, several lawsuits have been recently filed against the manufacturers because of these problems. I have my doubts as to whether these homeowners will prevail simply because the generally understood practice is for homeowners to maintain their structures by keeping snow off the siding and maintaining proper drainage around the perimeter of the homes. As I visit other neighborhoods, I see many examples of potential future problems due to lack of proper wintertime maintenance. I also see examples of construction not in conformance with building codes which are also contributing to these problems. 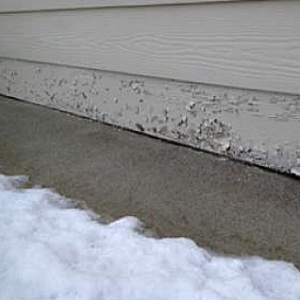 The critical action that needs to happen after a snow storm is to do a walk around your home and remove all snow against the exterior walls, windows and doorways as soon as possible. Interiors need to be inspected around door and window openings to check for wet floors or window sills and this water needs to be toweled up or wet vacuumed to prevent the formation of mold or mildew. Generally, you want to perform this work within 24 to 48 hours after the storm event to prevent any damage from becoming a larger disaster. The longer the moisture sits, the greater the damage and the costs. Weep holes on windows and sliding doors can be blocked by snow and ice also preventing proper drainage. These need to be also checked and cleaned after these snow events.

This heat pump is just one example of what happens during operation under the climatic conditions described above: 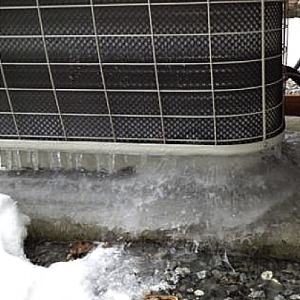 As you can see in the picture, there is a huge block of ice developing which extends from the ground and actually continues up into the heat pump interior. Closer inspection inside the heat pump also revealed a considerable amount of ice surrounding the lower coils and other system components. This is not ideal for optimum operation of this outdoor unit. This outdoor unit is above grade which gives it a better chance of survival. Those units below grade or in wells have nowhere for the moisture to drain. 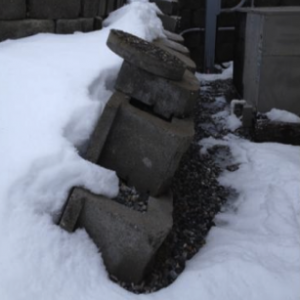 Here is just one more example of a problem with the potential for major damage. This block wall was improperly constructed using expansive clay soils as backfill. This soil absorbs significant amounts of water during the wet season prior to winter. Once the cold sets in, the soil expands significantly and puts pressure on the wall causing it to tip and eventually roll over. Over the course of several winters, this wall continues to deflect until it eventually does roll over and collapse. Given the proximity to the electrical service and the heat pump unit, one can only imagine the damage that may result when it does crash into those other components.

These are just a handful of the many issues noticed throughout the region during the winter season. So far, we’ve dealt with or observed the following issues in just a short couple of months:

It is obviously clear from all of this evidence that it really isn’t a question of “if something is going to happen, but when will it happen?” Every component in a home has a limited lifespan and everything, eventually, will fail. When you add in the additional ingredients of adverse weather, lack of proper maintenance and homes sitting for many weeks or months at a time without proper exercise of critical systems, this increases the probability of something happening sooner rather than later. Houses, like cars, need to be frequently used and systems need to be run and tested. We’ve learned this lesson from years of building homes. Having a professional HomeWatch specialist with a construction background to monitor and manage these many systems is your best and ideal solution. The “Neighbors Doing Favors” program does not work except when the smoke is coming from the roof of the building or water is pouring out under the front door sill and then maybe they are around to let you know. The next question is “do they have the experience and training to take the appropriate action to address the problem?’ By then, the damage has become a disaster.

The question is do you pay now or pay later?

According to statistics from the Institute for Business & Home Safety, toilet failures are the second leading source of residential water losses and failures, costing an average of $5,584 per incident after the deductible was paid. Water heater leaks/failures cost an average of $4,444 per incident and may not be covered by insurance if these failures occur in unoccupied homes without proof of regular occupancy or professional monitoring. The highest rate of water heater failures occurred in units between 6 and 14 years old. We see alot of water heaters that are in these later stages of life expectancy.

Contact us at Lake Chelan HomeWatch to learn how to prevent the items above by clicking on the this link, Contact Us